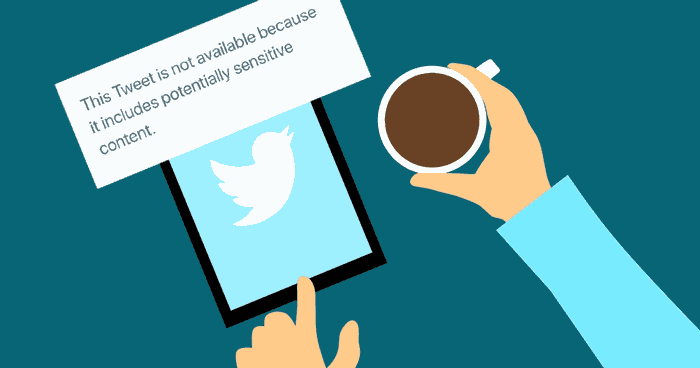 Twitter has over 199 million monetizable daily users as of the first quarter of 2021, and there are over 500 million tweets sent out each day according to statistics. These tweets are made up of up to 280 characters and can include photos, videos, GIFs, and links. With a large number of users and a huge variety of tweets posted daily, there is bound to be what is called “sensitive content.”

Tweets that are tagged as sensitive media or material that may contain sensitive content mean that it has hateful imagery, adult content, violent sexual acts, graphic violence, or gratuitous gore. These are content on Twitter that may possibly promote the normalization of violence and are therefore not allowed on the site.

Hateful imagery is any sign, logo, or photo that is intended to encourage and spread hate and discrimination based on a person’s race, ethnicity, religion, sexual orientation, social standing, disabilities, etc. The most common example is the Nazi swastika, which is a symbol used by people who believe in racial purity. Other forms of hateful imagery include depictions of people who are shown as inferior or treated like animals.

Violent sexual acts cover violence in any sexual act, either real or simulated. These may include rape, sexual acts without consent, sexual assault, and physical harm during a sexual act.

Gratuitous gore is content that has gruesome or excessively graphic media related to death, violence, mutilations, and torture.

Of course, there are some exceptions to these rules. If the users mark media that may contain sensitive content and use it for documentary or educational purposes, Twitter will allow the post to remain, the content muted or blocked behind a warning message.

Twitter does not actively screen the millions of tweets that are posted each day, they evaluate the tweets that are being reported by their users. If a tweet has been reported to contain potentially sensitive content, it will be assessed first. If it is found to fit the criteria of sensitive media but falls under the informative category, then it will simply be tagged and “blocked” as sensitive content.

The platform is mainly used by people to get updated with what is happening around the globe. Twitter acknowledges that there are topics that are considered sensitive that people need to know, disseminate, and discuss. That is why these posts, when reported as sensitive media, are not taken down.

Rather, they are put behind a warning message and must be marked as sensitive by the author or post owner. This way, people who are not agreeable to seeing disturbing or sensitive content are safe from accidentally viewing those tweets on their feed. And for those people who are interested in knowing the full content, it’s possible to unblock the media to view sensitive content.

If you are not faint of heart, then you may opt to unblock sensitive content from your feed. This will let you immediately see the full posts that have been marked as graphic or sensitive. You can easily follow these steps on how to see sensitive content on Twitter using your mobile phone or your PC.

2. Tap on the menu icon (three horizontal lines) at the corner to show the menu.

5. Scroll down until you see the section Safety.

5. On the menu to the right, select Content you see.

6. Then check the box beside Display media that may contain sensitive content.

Some Twitter accounts use sensitive media to arouse interest and engagement in their posts and gain followers. However, this strategy may not fit your brand or taste. You may simply opt to get help from the best Twitter growth service.