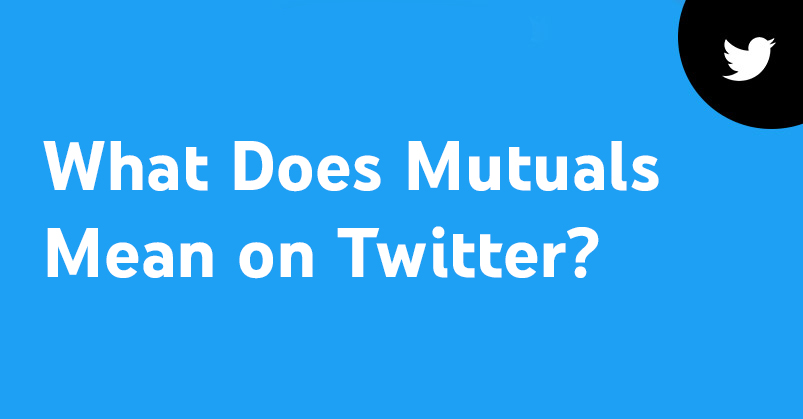 The micro-blogging platform has come a long way since Twitter founders Jack Dorsey, Biz Stone, Noah Glass, and Evan Williams built the company in March of 2006.

Milestones big and small have happened in and around the Twittersphere. The latest is Elon Musk, the richest man in the world, is on the verge of buying the Twitter platform for a whopping 44 billion dollars.

We can continue to ramble on and discuss this approaching disruption by Mr. Musk in the social media world but let’s save that for another day.

Small developments like organic Twitter jargon born out of avid Twitter users are equally relevant markers that indicate a healthy, self-contained environment of growth. Ratio, mutuals, or moots, are two prime examples of this jargon.

If you find yourself trying to keep up with Twitter jargon and just want to finally know what Twitter mutuals are, then you are reading the right article.

Learn what mutuals mean on Twitter and what these could mean for you on the platform in this short but informative read.

What Does It Mean to Be Mutuals On Twitter?

What are mutuals? Diving into the meat of the matter, Mutuals in the Twittersphere context means people who follow each other on Twitter and/or other social media platforms. “We are mutuals on Twitter” means that you followed them on Twitter, and they have followed you back.

Things seem so clear after they are explained concisely, aren’t they?

Mutuals are generally a good thing on a social media platform such as Twitter. Just like in real life, having mutuals is quite an assurance. That other people follow you and in some way or another approve of what you stand for on Twitter is mostly always a good thing.

Having a few friends make things a little better. Mutuals are the people that will surely get to read everything you have to say on your Twitter microblog.

Can you imagine passionately rambling about something not knowing if anyone will get to read your 280-character entry? Having mutuals makes sure that your tweet gets to be read by another soul.

On a more serious level, having mutuals guarantees you the interaction you need if you are a Twitter user that uses the platform for career growth in and outside Twitter. The more mutuals you have, the better. Accumulate more mutuals and both you and your moots reciprocally benefit from this mutually beneficial social media relationship.

We are sure you get it by now. Mutuals are always good, and having more means only positives for whatever it is you want out of Twitter.

Now you know the meaning of the so-called “mutuals,” go out and get more of them for yourself!

Be active on the Twitter platform and attract the right people to be your mutuals. Further your cause – whatever that may be – and rule your part of the Twittersphere and have fun doing it.