How to Switch Your Twitter Feed to a Chronological Timeline 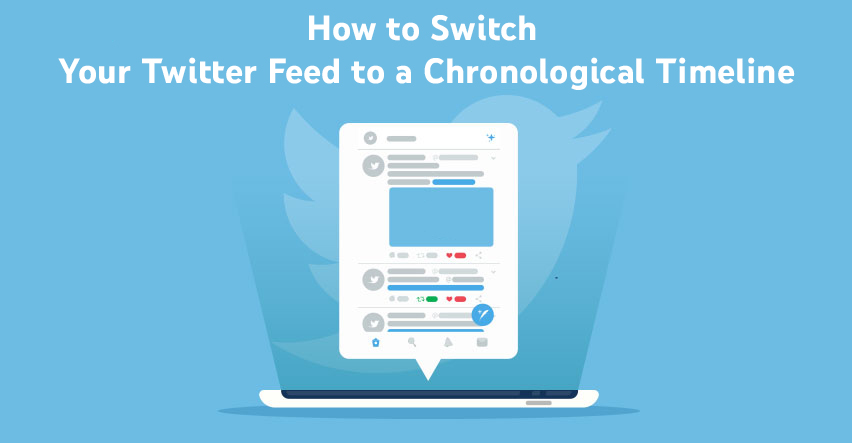 You may have noticed that your Twitter feed is showing Tweets from people or profiles you don’t follow. This might seem confusing and even obtrusive to your privacy on the platform. There is a simple explanation for this.

This shift in the Home feed is Twitter’s way of following suit with what Facebook and Instagram are doing. These social media sites have created an algorithm that pushes posts that they think are relevant to the user to the top of the feed.

When Twitter imposed the same algorithm-based timeline on its users, there was an uproar from a lot of people. Users are seeing Tweets from people they don’t know and tweets that are even days old. This is not the real-time, fast-paced Twitter that they have come to know.

So, why did the Twitter timeline have to change? Read on to know the reasons for this drastic shift.

And if you’re one of the people who are not happy about the changes, then learn how to get your reliable chronological feed back in this short article.

Twitter, just like other social media platforms, wants to deliver the best for its users. So, in 2016, the company introduced, or rather forced, the algorithmic feed that is implemented on other sites.

The timeline algorithm is a recent innovation in social sites. It brings to the front the posts that people would be interested in. These are based on each user’s chosen topics of interest and the types of posts they interact with.

Twitter implemented the same feed algorithm on their site. Instead of seeing a chronological timeline of Tweets, users are getting a compilation of recommended Tweets that may be relevant to them.

Twitter sees this as a huge improvement to the user experience on their platform for several reasons:

People go on Twitter to get the hottest updates on what’s happening in the world. This reverse-chronological feed always shows the latest posts on top, which lets people react in real-time.

The switch to an algorithm-defined feed interfered with the reverse-chronological order of posts and defeated the purpose of going on Twitter.

The only redeeming quality that makes the new Home feed interesting is that the posts are related to topics that you like.

How to Use the Reverse-Chronological Timeline View Feature?

Fortunately, Twitter finally made a compromise in reaction to their users’ clamor to get the old reverse-chronological feed back.

How to Go Back to the Algorithm-Based Timeline?

If you would like to receive tweets that are relevant to your chosen topics rather than the latest ones, then follow these steps.

What shows up in your feed is entirely up to you.

If you would like to broaden what you see on Twitter, then the default algorithm-based timeline is for you.If you only like to see on Twitter the latest tweets and posts from people you know and profiles you follow, then we suggest that you switch to the reverse-chronological feed.